Being the parents of a 12 year old boy, we know a fair amount about fake weapons. From the floppy cardboard and tinfoil type, to intricate rubber band powered guns made of Legos or Knex, and “modded” Nerf guns, we’ve witnessed an evolution of the craft in our home.

Here are some other places to learn about making cool armaments.

Backyard FX is a series from Indie Mogul, a network for indie filmmakers. Search their site for help on the props you need
samples:
retro ray gun
giant death ray (Do you need to vaporize the world on a budget? Make sure to wear eye protection)
battle axe

Answers to common sword questions from cosplay.com
Make a crossbow
How about a hand-held Tesla Coil Battery Powered Plasma Gun?
Several Star Wars weapons tutorials and other SW gear (scroll down)
and last but not least – a Steampunk Nerf Maverick mod

Here’s a picture from the way back machine. We taught kid’s classes in Los Angeles for a couple of years. These student certainly enjoyed making Organic Armor weapons. 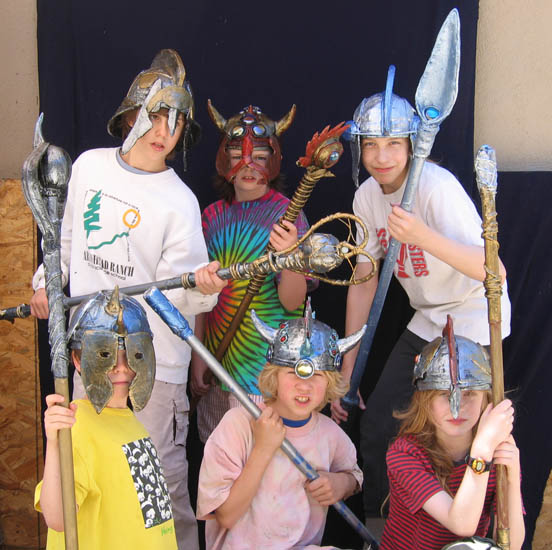