We’ve covered your eyes, your feet, your parts in the middle. Today we’ll talk about the top of your head.

Dreadfalls are a type of semi-temporary hair extension popular at Burning Man, anime cons and other places. They come in varying thicknesses and colors, sometimes with ribbons and beads attached. They can be quite expensive to have done in a salon (600.00+). It’s worth trying to do your own dreads if you have the time and the patience.

This page thoroughly outlines some of the ways people make and attach dreads. I warn you, it’s time consuming to do this. The basic formula is: synthetic hair (or other fiber) + backcombing + heat = dreads

Sources for feltable wool:
Back to Back Alpaca sell felting supplies. Based in AZ, this family run business buys wool from breeders all over North American.
Earth Guild, a local Asheville company, carries locally grown fibers in lovely colors.

Lustful Locks sells premade and custom dreads as well as the tools needed to attach them.

The history of hairstyles is fascinating . This site includes the history of the Mullet, and an article about how wigs became the rage in the mid to late 1700’s, according to Michael Kwass:

“If length of hair was a marker of status, the rise of the wig seems easily explicable. In fact, at least one eighteenth-century fashion historian, Guillaume Molé, suggested that Louis XIII had tapped into this ancient association between hair and status when, as a young man, he let his natural hair grow long. As he grew older and began to suffer from premature balding, he resorted to wearing a wig, a practice that his courtiers were quick to emulate. Once the wig became fashionable at court, the emulation thesis holds, it would have become an object of desire among lesser social groups—country nobles, merchants and professionals, and even well-off artisans—who sought to confer a degree of dignity upon themselves by imitating their superiors. To borrow the language of economists, the wig seems to have been a much-desired “positional good”—a good that positions its owner or user in a given social order. ”

Speaking of the 1700’s:
Runway hairstyles of John Gallianos inspired by the time period.
Some info on Marie Antoinette’s hair from PBS.
Tutorial on doing Marie style hair from Ask Me Makeup.

Some sources of anime style wigs:
Carrot Anime
Custom wigs from Devious
How to alter a “normal” wig to something else
Did you know you can dye a wig with a Sharpie? Recipes for homemade dye and tips for application from cosplay.com 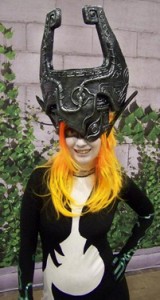 Keep your wig from driving you crazy (itch itch)

25 signature hairstyles of the the last 100 years
Bizarre buzz cuts with a few mohawks thrown in (I love WebUrbanist).

And last but not least – a bald head cap for when Mr.T is your avatar.