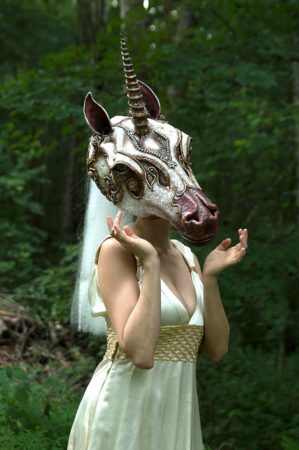 We are in love with this piece! It was commissioned by the Minnesota Renaissance Faire to use as their mascot. The faire is the largest in the US and has been running since 1971. This mask/helmet will be used in their promotions and as part of the Royal Court performances.

The piece was technically challenging. Paul had a couple of false starts. It is so large and had to be well balanced and provide good visibility for the performer inside. He ended up sculpting the basic form from good old earthen clay and forming the armor over that. The eye holes are hidden in the decorative scrolls on the sides of the nose.

Anyone who has worn a heavy or awkward costume or puppet will appreciate that the back of it is weighted so it won’t pull forward. Even with the weights attached, it is only 3 pounds!

Dora, our MRF liaison, said she got tears in her eyes when she opened the box, because it was so beautiful.

A funny side note to this story – we have some new famous neighbors here in the Asheville area – Abby and Bryn Roberts of Finfolk Productions, makers of fine mermaid tails. We had lunch with them in June when this project was in process in the studio. They are from Minnesota and when we mentioned the unicorn they were very excited. Turns out they both worked at the faire as teens, including wearing an earlier incarnation of the unicorn mascot costume! Small world.

We look forward to seeing how the faire uses the mask. Maybe some of you readers will get to see it in person. The faire opens August 20th.

Here are some work-in-progress pictures, as well as some lovely ones made by Leah Spitz and R. Keith Clontz, with one of our favorite models Whitney Diane.