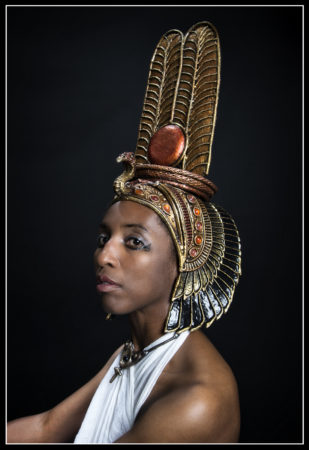 We’ve completed three large ancient Egyptian style headdresses in the last year. The latest one is the Nefertari and features the spectacular golden elements of the vulture goddess, and a double plume on top. It was made for Elizabeth McKinnon, a cosplaying historian. We’re excited that it will be premiered at the DragonCon History Fashion show this September. 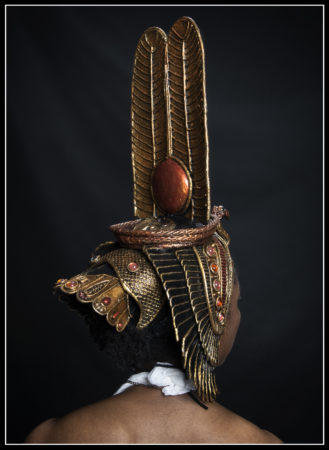 Nefertari was the first royal wife of Ramesses the Great. Her name means ‘beautiful companion’. She was highly educated and able to write hieroglyphs, which she used in her diplomatic work. It was fascinating to learn about her and study 3000 year old temple and tomb paintings in order to come up with the design.

The vulture (sometimes identified as a falcon) has its wings spread around her head in a protective manner. The crown associated its wearers with the goddess Nekhbet of Upper Egypt and emphasized the queen’s maternal role. When worn by female royalty, it implied that a queen was a divine being,

On top of the royal vulture headdress is a Shuti (meaning “two feathers”), consisting of two, tall ostrich or falcon feathers combined with a sun disk. It is a symbol of divine law.

Posting these images on Facebook brought up some interesting comments about race. What was Nefertari’s actual skin tone? Rodney of Tempus Fugit Design shared this article which debunks the idea that the ancient Egyptians were either white or black. Elizabeth says “ Egyptian woman are depicted pale because that was considered beautiful but not Nefertari, she is depicted with much darker skin. Many Egyptologist believe she might have had African background.”

We’ve made Nefertari’s headdress and two Cleopatra headdresses with similar elements. I hope someday we will be commissioned to make one for each of the other famous Egyptian queens: Nefertiti and Hatshepsut.