Thorin Oakenshield, a character in JRR Tolkien’s “The Hobbit”, was the grandson of the King of the dwarves, Thrór. He was known for being leader of the company (including Bilbo Baggins) that took back the Lonely Mountain and it’s treasures from the dragon Smaug. He became worthy of this fabulous crown, after going through a less noble phase and emerging truly heroic at his tragic end.

The Peter Jackson production of “The Hobbit” trilogy starred the handsome Richard Armitage as Thorin. They hired the best movie prop fabricators in the world, WETA workshop, to craft his crown using traditional metal working.

A few months ago we were hired by cosplayer Erik White to recreate this piece in Organic Armor. The first step in this kind of project is research. We look for images of the original work as well as other replicas and interpretations (there’s a even a Lego one!).

In this case that involved screen captures from the films and digging up detailed photos floating about the internet. The lack of 360 degree views proved to be an especially challenging aspect of this project.

The next steps involved much trial and error, pattern making, pattern tearing up and remaking. The crown has many precise angles and multiple levels.  Trying to get all lines and points to look right and line up was tricky, a bit like origami.

Did you notice the front of the crown is actually a raven, with outstretched wings encircling the head? Tolkien named many of the key pieces of armor and weapons in his books, including this one.  It is “The Raven Crown of Erebor” (Erebor is the Kingdom of the Lonely Mountain).

We love the crown’s art deco sort of lines. The dwarves have a more geometric aesthetic than the other races of Middle Earth. This is different from our usual work. But now that we’ve gotten the hang of it you will see more in future projects. 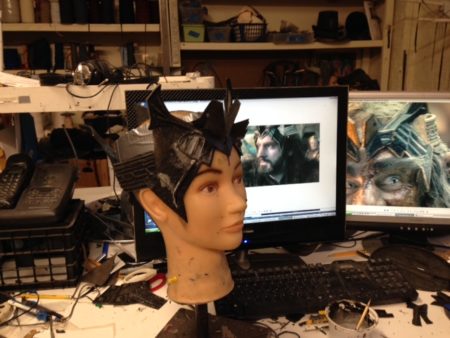