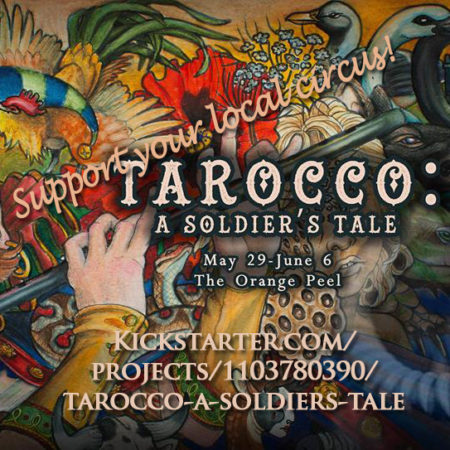 We have been involved for a couple of years with a local circus arts/theater company called Fox and Beggar Theater, helping out with costume elements and giant puppets.

We want to let you know about their new show and ask you to consider supporting their Kickstarter campaign which ends Friday.

Tarocco: A Soldier’s Tale is based on a World War I story woven around the 22 Major Arcana cards of the tarot. It’s told through circus arts with an original electronic score and a 15th century Venetian aesthetic, with a bit of steampunk thrown in.

Jennifer, the quiet half of Organic Armor, loves to make giant puppets for parades and pageants. These are mostly a labor of love, although Street Creature (her puppet artists collective) did win a grant this year. She helped make two huge bulls for Fox and Beggar’s Animalia last year. This year she made a large mask for the Heirophant, the 5th card of the deck.

Nat Alister, the creative director of Fox and Beggar, calls Tarocco “a kaleidoscopic narrative about one soldier’s journey out of the trenches of the first World War and into the mesmerizing dreamworld of a 15th century Italian Tarot deck. Trapped in German-occupied Piedmont, the dying soldier uses a deck of playing cards (the 500-year-old “Tarocco Piemontese”) to weave himself a fantasy of ruin and redemption and keep the dark reality of war at bay. “ 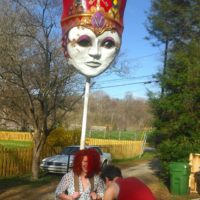 We are long time admirers of the art of the tarot. Like our own work, it delves into archetypal, magickal and mythical themes.

Nat was inspired to write the story in part by the art of Alexander Daniloff, a contemporary Italian painter who created a gorgeous tarot deck with a Comedia dell’arte flavor.

The whole Tarocco team is talented and innovative. They are working hard to create a dazzling blend of history and fantasy for this show, which they will be taking on the road after their Asheville performances.

They have almost reached their goal of 10K but there are only 3 days left. Watch the video and donate if you can.