of Organic Armor is to make amazing things that support other artists, performers and creative folks in their own creative endeavors. This is part 2 of sharing some recent projects like that.

Hector Valle is an indie film maker working on a horror film called “Psychosis y Dementia” His original story line goes something like this:

“In 14th century Central America a Mayan beast of retribution is revived by the blood of an innocent victim to exact revenge. The creature goes on a rampage until his path crosses the daughter of the murder victim…”

Hector has the multi-platform thing going on, with a book based on the story due out on Amazon soon, and a comic book inked by Cristian Sauret to be published in time for NYC Comic Con 2015. 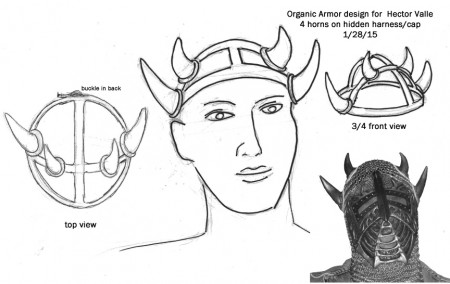 His character needed four horns placed exactly on a harness to fit a specific medieval style helmet that he is having a blacksmith make. There was also a layer of chainmail to complicate things. We collected several measurements and started with a sketch to clarify the design. 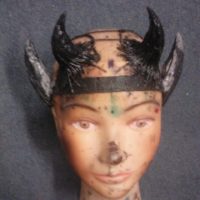 Once we began making it there were a few rounds back and forth with photos and feedback. The final results were spot on. Hector sent us the following email:

Dear Jennifer from Organic Armor;
I received the package and opened it. I was stunned. I placed the horns on the bust that displays the mask of Psychosis. I just turned back to look at it and tears came to my eyes.
They are FREAKIN AWESOME!!!! I am blown away by the way they fit and how they match the look of the mask and the new black and gold chainmail I brought. They are so flawless that I do not have to cut the chainmail to bring them through. The straps are virtually invisible. ORGANIC ARMOR ROCKS!
I cannot wait for my photo shoot and I will send you photos and shout you out on FaceBook. Thank you, thank you, thank you!
Did I mention that ORGANIC ARMOR ROCKS?

Pretty sweet testimonial! We look forward to seeing pictures of the piece in situ and wish Hector great success with his film!