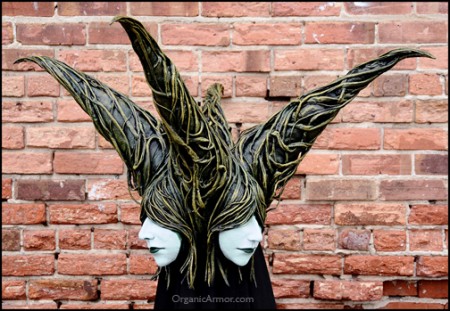 We were contacted back in the spring by a filmmaker who was running an Indie GoGo campaign to raise funds for his project, a live-action fan-film of  “The Search”, an Avatar: The Last Airbender comic trilogy. He wanted an estimate for a headdress of the Mother of Faces.

Alexander Herron and his team are huge fans of Avatar and decided to make this film from their deep love of the story. We gave them a price and wished them luck in the campaign. A few weeks later we heard back and the project was a go!

The Mother of Faces is a fascinating character. She is goddess-like with faces in each of the four directions, who can change her size at will, even growing to the size of a forest. She lives in the Valley of Forgetting and resembles a tree in many ways (she looks like a cousin to the Ents).  Her job through eternity has been to create faces for all living things, placing a piece of herself in each one. She can also alter memories, erasing or restoring them as she wishes.

We studied the reference material and I (Jennifer) made a sketch. Alex sent us photos of the actress who would be wearing the piece so Paul could make the 3 sculpted faces match her real one. This was a gratifying challenge for him.

Then he began building the armature for this very large (24″ x 24″ x 24″) headdress. Wooden skewers, poly fill, and carefully layered jersey formed the underlying structure. The next step we nicknamed “twizzling”. He made many, many twisted strips of jersey, working down from branch size to tendril. A beautiful, four-pointed, root-like tangle slowly emerged.

When it looked complete, Paul gave it several coats of latex to smooth and merge the “twizzles”. Then he painted it. This involved layers of glaze and dry brushing. He wanted it to have an inner glow and subtle woodland hues. The skin of the goddess faces has a leafy green tint, which will be repeated in the actress’ makeup.

“The Search” team was thrilled with the results. We can’t wait to see what they do with it.

We love working with a creative team like this, making magic on many levels. I hope more projects of this type will come through in 2015.