Yes, it’s a Barbie World in the Organic Armor studio sometimes (though we don’t use plastic). We’ve made three cosplay sets based on collectible Barbie so far and they are fun!

This Goddess of the Galaxy corset and collar was made for Geeklore Costumes for the Labyrinth of Jareth Ball. We don’t have full costume pics of it yet. It’s very Metropolis isn’t it? Love the art deco lines. 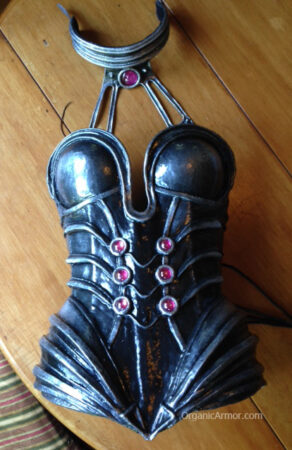 Goddess of the Galaxy Barbie cosplay corset and collar

Here is the lovely Onyx Amour in her full Queen of the Constellations set. This is the second Barbie cosplay we have made for Onyx. Last summer we created pieces for the Empress of the Aliens (see below). She wore it in the costume contest at DragonCon. The baby alien (powered by a rhumba) popped out from under her skirts during her procession across the stage!

The Queen of Constellations will be making an appearance at DragonCon 2014, watch for her celestial presence. 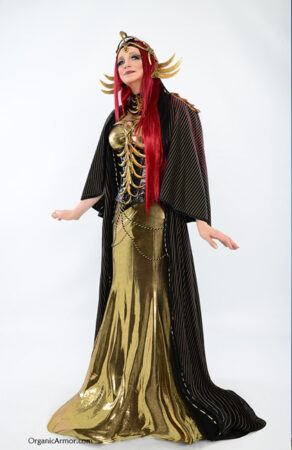 Onyx amour as Barbie Queen of the Constellations, photo by Toni Riales

Onyx Amour as Barbie Empress of the Aliens at DragonCon 2013

I just spent far too much time perusing a collector Barbie site. There are so many that would be a good fit for an Organic Armor cosplay. Anyone want to commission one of these?

We’ve been traveling to festivals, entertaining out of town guests and squeezing production into the wee hours. It’s almost August! 26 days till Burning Man and 29 till DragonCon. Whee!