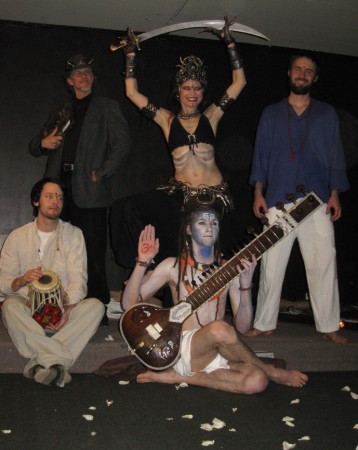 Every year since moving to Asheville (4 years now) we have attended the Asheville Fringe Festival in January. And we would say “We should create something for this next year!”  And then we would be too busy and forget. But this year we didn’t forget and with the collaboration of the amazing Claire Dima, we put a piece together.

Paul has been fascinated by Indian mythology for 30 years and the story he wanted to start with was one of the goddess Kali. Watching Claire perform at bellydance festival Triboriginal last October, he noted her fierce intensity, as well as her skill with a sword.

“She would make a great Kali.” he said, and proposed the idea to her. She also had a strong connection to the Kali archetype and so “The Triumph of Kali” was born.

We started with a beautiful retelling of part of her story in the Time/Life series “The Enchanted World”. Indian myth is so complex it’s hard to find a beginning and end sometimes, every character and place has 3 back stories and 4 continuing ones. We trimmed and reworked it. Here is the basic plot:

This story starts with the relationship of Parvati and her consort Shiva. Shiva is fanatically dedicated to his meditation on top of a mountain, and is not appreciating his beautiful and loving partner. Parvati decides if she can’t beat him, to join him. She becomes a wandering mendicant, chanting prayers night and day in the wilderness. After a few years of this she meets a rude beggar who tells her she is wasting her beauty chanting the name of the base Lord Shiva. She defends her love and, lo and behold, the beggar reveals himself to be Shiva himself. He tells her he can’t live without her and had given up his meditation to search for her. They have a loving reunion.

Back on top of the mountain they live happily, but in the lower realms an evil demon is wreaking havoc, terrorizing her followers who she considers her children. They call out to her for help. She hears their cries and becomes enraged like a mother bear. Her rage transforms her completely and she is becomes a wild warrior with a third eye, wearing skulls and severed arms, her tongue lolling about. She descends the mountain and does battle with this demon. He has a unique gift – when his blood is shed and hits the ground, armies of new demons rise up from it. But Kali knows about this, and after she slices off his head, she drinks every drop of his blood before it spills. He is destroyed.

She then dances wildly around the battlefield slaying the other demons that had gathered to torment her followers. She is in a frenzy of bloodlust and kills everything she can reach. Shiva watches this from the mountain top and, being the god of destruction himself, can relate. But he doesn’t want his beloved Parvati to be fully consumed by her aspect of Kali. So he comes down and calls out to her to stop. She is blind to him and continues her dance. He finally lays down at her feet and as she leaps upon him ready to stab, she looks into his eyes. This brings her back to her loving self.  They embrace and return once again to their mountain to live and love. 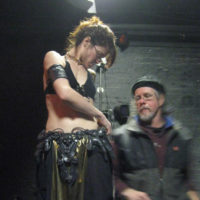 Claire called in her beautiful friend Magick Sean to play Shiva. She also recruited wonderful sitar and tabla players Tom Cowan and Noah Wilson. Multi-talented Julia Amlund did make-up hair, photography and general support. There were some glitches along the way including Paul suddenly becoming the narrator at the very last minute. Various illnesses and work hours impacted the rehearsals. The costume wasn’t done until the day of the first performance. We never actually did the whole piece through until that first performance! But it came together beautifully, mainly due to Claire’s  hard work and attention to detail.

We did just three performances. We were the last piece of the evening shows. The audience moved from the Bebe Theater over to Firestorm Cafe for our piece. This allowed us to create a ritual atmosphere. Sean/Shiva greeted the audience with ashes and rosewater as they seated themselves on the floor. He anointed the foreheads of those who wished it. The musicians played softly. Paul then began to read the story and Claire and Sean enacted it. It was very well received.

We were even awarded “The Artist(s) that best challenged and/or pushed the boundaries between art forms” by the Fringe Festival producers. Now we have some offers to put the piece on in other places!

We plan to get some better pictures of the costume in the next few weeks. I’ll post them here and on Facebook.