I’ve been speculating that ancient Greek, Roman and Egyptian wear will be the next steampunk. The fashion pendulum usually swings between excessive detail (i.e Steampunk) and simpler, classic lines. But the ancient Mediterraneans had more than nicely draped bodies going for them in the fashion department.

Ancient greek hairstyles were anything but simple.

Churches have kept the genre alive for decades with their biblical pageants, so most pattern companies have a selection of styles to choose from. For a basic toga you don’t need to buy a pattern. For a more feminine line try one of these gowns:
McCalls pattern
Egyptian gown pattern

Choose a diety to embody:
List of Greek gods and goddesses, and their Roman counterparts
Egyptian ones

Ancient Egypt has been well represented in the movies. Classics like “Cleopatra” had sumptuous costumes. Watch these clips for inspiration:
1934 with Claudette Colbert (sorry about the annoying music)
1963 with Elizabeth Taylor (the one where she first fell for Richard Burton, and says “Fool! Don’t you see now that I could have poisoned you a hundred times had I been able to live without you.”)

* A note about language – punk purists bristle at adding the word “punk” to the latest fashion fad. Can’t blame them but it is a handy word. As my friend Tobi said recently on our Facebook page “A major part of punk was about doing your own thing, and the word has been somewhat repurposed to put more emphasis on that part of it. Language, like culture, evolves…come along for the ride!”.

Organic Armor has made many divine headdresses. Gods, check this out, and this one. Goddesses, look at this and the new one below. Let us make one for you! 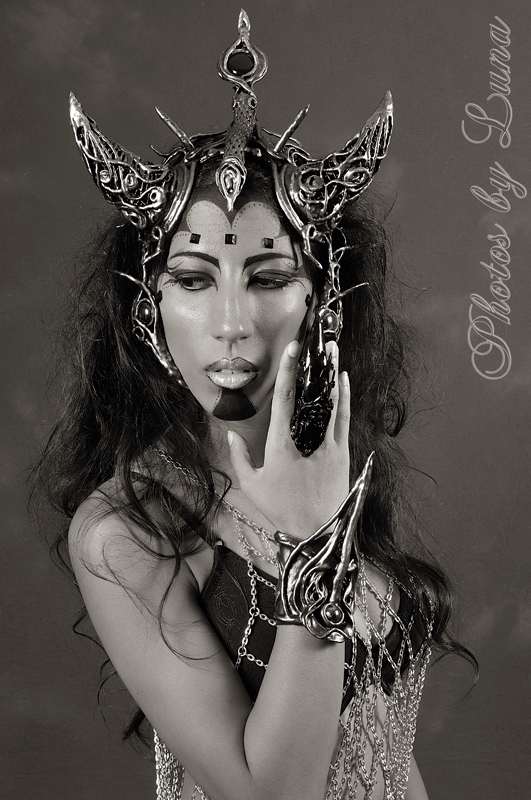