the ever-darling Merman Arion in his custom circlet, in a new photo by Mamzelle Bulle

Lots going on as usual! Paul injured his arm two weeks ago – he tore the ligaments in his elbow. So he’s moving a little slower than usual, which isn’t so fast 😉 But it’s getting better everyday.

AMAZING photo of Helena Young in her Cleo headdress and costume, photo by Sharisse S Photography

He finished a fantastic Kali dance set – headdress, necklace of skulls, amazing belt of severed arms, and armbands. We will share those pics as soon as we can.

He’s currently working on a crown of skulls similar to the Ghost Baby crown of 2 years ago. This is for a lovely customer, Johanna, who is planning to wear it to the Wave-Gotik-Treffen, the world’s largest goth fest, held in Leipzig Germany. According to Wikipedia “With 18,000 to 20,000 regular attendants, the WGT is one of the largest events of the Goth, Cybergoth, Steampunk and Rivethead subcultures worldwide.” 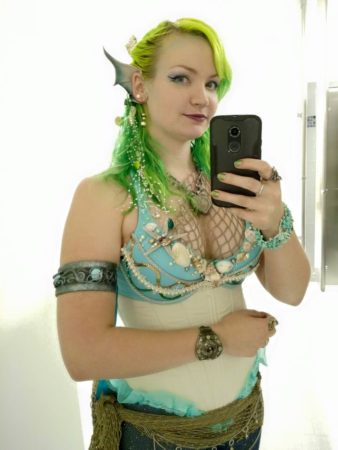 We’re about to list four new circlets in the shop. Check back Wednesday to see them. They will make a nice gift for yourself or a friend.

Our Organic Armor Arts students are starting to produce some cool stuff. I just wrote a blog post about it here. You should join the course and DIY your own armor. We are sending out a newsletter next week with a discount coupon code for the course. Sign up at the bottom of the page if you are not on the mailing list yet.

Upcoming projects include a DragonAge cosplay and 2 sets of Lionfish-themed mer gear. More about those in a couple of weeks.