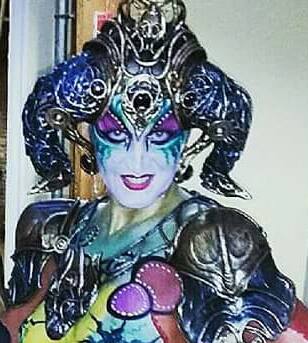 Christy in Organic Armor and bodypaint

Paul was invited to the Living Art Greensboro Bodypainting competition last weekend and had an inspiring time there. Organizers Scott and Madelyn, who are world champion bodypainters themselves, created the day long event with top painters from around the world painting live. The evening featured a runway style show to display the finished works. The setting was a huge old mill building in the North Carolina city of Greensboro.

One of the teams incorporated Organic Armor into the design. The model Christy Faith Nolan was painted by a team of talented artists including Scott Frey and Madelyn Greco, Amanda Lewis-Evans, Carolyn Woods, and Lisa Jay.

Living Art America puts on the only bodypainting events sanctioned by the World Bodypainting Association and so draws top talent. They are also producing the 6th annual North American bodypainting competition next weekend in Atlanta. Wish we could go to that one too.

We hope to do some collaboration with Living Art America in the next year, designing some pieces specifically for use with bodypainting.