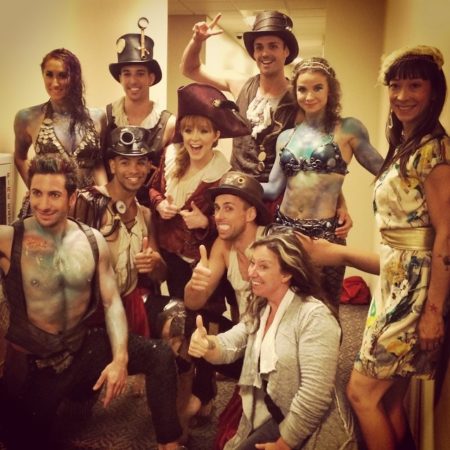 Last month, by a lucky connection, we got to have one of our Sea Goddess sets in a Lindsey Stirling music video. Cirque Berserk, a wild and wonderful circus troop we know from way back (early Burning Man), contacted us looking for a sea themed bra and belt for a dancer. They needed it right away.

The lovely Hannah Fraser, a Los Angeles-based professional mermaid, happened to have one, in the right size no less, that we had loaned her for a photo shoot in June. Phone calls were made and the set found it’s way over the Americana complex in Glendale on July 18th, where this elaborate live show was put on.

A Sea Goddess set similar to the one in the video. Model: Kim Berrier Photographer: Nic Adams

Lindsey Stirling, if you don’t know, is a hugely popular violinist, dancer and composer.  Her YouTube channel currently has more than five million subscribers. I first became aware of her when I saw her beautiful ice cave video “Crystalize”.  Her talent and charm have taken her far.

In the new video, “Master of Tides”, she is a elven barefoot pirate dancing in a fountain of perfectly timed water and light effects. Her steampunk pirate mates spin fire and flip over their tridents exuberantly.  The Sea Goddess bra and belt are worn by one of the two woman dancers who represent sirens. She first comes in at 1:39.

This set is now for sale here.

The other costumes came from Media Noche and Headn Home.

I hope to find out the names of the dancers soon and will update this when I do.

Green Light Media was involved, and UE Boom provided the sound with 25 small, powerful wireless speakers. It was part of their Make Music Social ad campaign.

Big thanks to Suzanne!