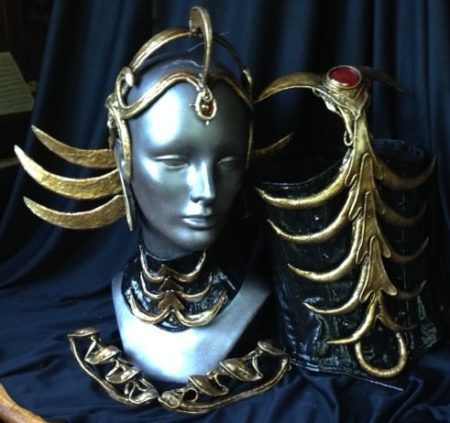 Corset, headdress + for Barbie Queen of the Constellations

July has been super busy. The high season of festivals and cons is upon us. Custom orders are flying in and out the door, many of them on time by the skin of our teeth. Whew!

We’re missing our dear assistant Nara, but Torey is doing great, learning the ropes and bringing her good cheer.

We snuck in a little vacation in June and traveled north up the east coast. Visited family and got to see two amazing museums: The Brooklyn Museum of Art (the Swoon installation is wonderful), and the American Visionary Art Museum. If you get a chance GO! We were so inspired!

What is visionary art you might ask? This is the AVAM’s definition:

It is not easy to define “visionary art”. Like love, you know it when you’re in it. Visionary art has been called by a lot of other names — outsider, isolate, or raw art to name just a few. Although there is a kinship with folk art, in that both tend to be made by everyday “folk” or people, we define folk art as art-making traditions that are learned at the knee, or by familiarization with an art tradition of a specific ethnic or geographic group (i.e. Amish quiltmakers, Hopi Kachina dolls, even colonial portraiture).

We like the term “visionary” because everybody dreams, but our dreamers don’t go to school to learn how to express their visions. Visionary artists are self-taught, intuitive people who find their own way into the making of art in an intensely personal way. Visionary art dances on the edge.”

There is another kind of visionary art, a descendant of the fantasy, new age, and psychedelic art from the 60’s and 70’s, as well as surrealism and eastern religious art. Alex Grey is the most well known representative. The genre is becoming more popular worldwide through the influence of transformational festivals like Burning Man, Boom and Rootwire (going on this weekend in WV) . They often feature live painters (like our talented daughter Radhika Hersey) and gallery domes. The themes are often overtly spiritual. 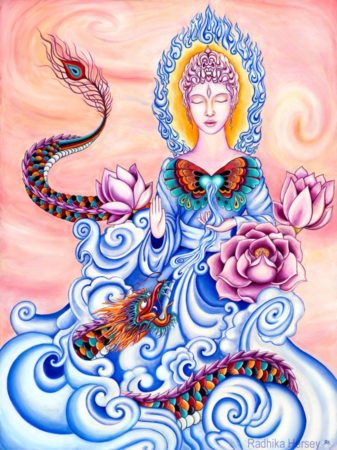 I see Paul as a visionary artist of both kinds. He never went to art school. He went off on several non-art tangents before finding his voice and medium with Organic Armor.

His early costume and prop work had nothing to do with commercial potential. He was responding to a call from inside to express archetypal mysteries. Like many west coast artists of the 90’s he found a tribe in the motley crew of Burning Man. That gave him permission to expand and deepen his exploration. There was a rawness and beauty in it from the start and people responded to that.

So is he a visionary artist now, almost 20 years later? He spends a good amount of time translating pop culture icons into Organic Armor. Not sure how spiritual Barbie Queen of the Galaxy really is 😉

He is a fine craftsman for sure. But he also finds time (not enough) to invent and dream up new motifs and constructions, responding to that inner voice. So I would say, yes. Here’s to more along those lines for him and all of us. The world is a better place because of it.