The tailor to the gods, goddesses, warriors and priestesses of our world works in an unassuming studio on Lyman Street in Asheville. He fashions the gold and copper breastplates, armbands, headdresses and elaborate belts that supernatural beings wear for ceremonial purposes, performances or just for really great parties.

Made with foam, latex, paint, faux jewels and a heaping dose of transformative power, Paul Hersey’s “Organic Armor” is simply divine in more ways than one, and to wear it is to discover the hidden warrior-princess-tribal-punk-fairy that you never even knew lurked within you.

Calling Hersey’s organic armor costume pieces doesn’t quite convey their gravitas—or their wildly imaginative quality and sense of fun. His bejeweled gold bikini tops (think chained-up Princess Leia in the den of Jabba the Hut) and metallic top hats (think post-apocalyptic leprechaun) aren’t exactly daywear unless you happen to be spending the day at Burning Man. But they’re not grown-up Halloween get-ups either. They exist somewhere at the junction of inner fantasy and universal archetype, a place, Hersey says, more and more people are interested in exploring.

A former computer programmer, Hersey discovered his own affinity for what he calls “the masquerade” in the late 1980s when a friend brought him to a participatory performance event, part of the alternative party scene evolving at that time in Los Angeles. Watching the revelers in bodypaint and wild, homemade disguises dance to hypnotic music sparked Hersey’s imagination. “Someone drew on my face with a Sharpie and that was it,” he says. He started making his own costumes, first from paper mâché and materials he had around the house.

The California alternative party scene eventually spawned bigger events such as Burning Man, the event that creates a city of nearly 50,000 people in the Nevada desert for a few days each summer. But stiff, heavy, hot and uncomfortable costumes put a damper on the “radical self expression” that is central to these kinds of gatherings, so Hersey continued to experiment with materials, eventually hitting on the foam and latex combination he now uses. Lightweight, versatile, comfortable and, above all, unique, his headdresses, breastplates and cuffs started to catch the attention of theater producers and fellow masqueraders. Hersey started selling his pieces at events such as Prepare for Playa, a pre-Burning Man marketplace (Burning Man is strictly noncommercial) and in 2003, quit his job to make Organic Armor full time with the help of his wife Jennifer Murphy who runs the business side of the operation. After more than 20 years in Los Angeles, the couple and their son moved to Asheville in 2008 (their adult daughter stayed behind in L.A). 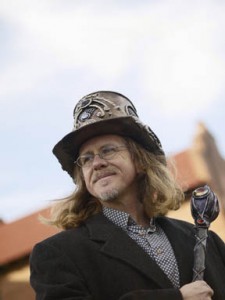 Part of Organic Armor’s success can be chalked up the fact that its appeal isn’t limited to one group or type of person. Hersey’s visual vocabulary spans centuries and continents, incorporating, among other things, Celtic, Viking and Aztec patterns; art noveau and art deco motifs. There are horned helmets and metallic cuffs that are easy to imagine being worn into battle by an early Germanic tribesman, and headdresses that might befit an ancient Egyptian priestess. But clearly, many of the references are from cultures and worlds that exist only in the imagination. That’s part of what makes the armor attractive to the many sub-groups that purchase it for performances, conventions, gatherings, reenactments and festivals.

There are the LARPers (Live Action Role Players), who get together to portray characters in a fictional setting (such as a medieval fantasy world or the Harry Potter universe), the post-modern circus and vaudeville performers (fire dancers, belly dancers and such), the urban faeries, and Renaissance fair crowd. Many of these clients are looking for pieces with a certain feel and will order a pre-made garment from Organic Armor’s web site, while others make custom orders. Murphy (who does all the client communication) says that some people will send a whole file of pictures, drawings and measurements to help give Hersey a vision for their piece.

But not all Organic Armor clients are trying for a completely unique look: some want to look exactly like their favorite character from a video game. Enthusiasts of cosplay — a relatively new phenomenon that started in Japan — frequent anime, sci-fi and gaming conventions dressed as characters and sometimes reenact scenes from games. While Murphy stresses to clients that they will never be able to create something identical to a game character’s garb, they come pretty close. An Aztec-inspired headpiece for Midna, the Twilight Princess in Legend of Zelda is one of the top requests Hersey receives, followed closely by accessories for Princess Garnet from Final Fantasy. Organic Armor client Mary Hancock says she ordered three brooches for the Princess Garnet outfit her daughter wears to conventions such as Megacon in Orlando. “My daughter was absolutely thrilled with the pieces,” says Hancock. “She can strut because she knows she is as close to the original drawings as anyone has ever been! There is a sense of confidence and pride knowing you are one-of-a-kind.”

That kind of reaction is common, says Murphy. When customers try on a piece of armor “They look in the mirror, and they just expand,” she says.

Hersey says it’s because the armor brings to the surface the desire that we all have to connect with the mysterious, powerful part of ourselves that we usually don’t access in daily life. “You can take one part of your personality and magnify, and just play,” he says.

Los Angeles costume designer Adele Satori, who wore an Organic Armor headdress in a performance she did with nouveau-vaudeville troupe Lucent Dossier, says it’s hard to capture what happens when wearing Hersey’s creations. “It’s a bit otherworldly,” she says. ” I felt primal and regal. We were performing as deities from another world and the Organic Armor really helped tell that story.”

If you think Hersey’s armor is fantastic on humans, wait until you see the gear he makes for dogs. What started as a one-off costume for a pair of pugs at a gallery opening turned into a sideline business. Who can resist a pug in a helmet, body armor and cuffs? He makes kid-sized armor and weaponry, too, and in Los Angeles even taught very popular armor-making classes for homeschool students.

While Organic Armor is always available for order online, Hersey and Murphy can also be found selling their wares on the underground-alternative festival and convention circuit. They’ll be at Burning Man again this year, as well as fantasy gatherings such as the Fairy Festival in Glen Rock, Pennsylvania the first weekend in May, the Lightning In A Bottle Festival in Santa Barbara on Memorial Day Weekend, and sci-fi and gaming conventions such as DragonCon in Atlanta during Labor Day Weekend. Organic Armor’s studio in Riverview Station is open during the twice-yearly River Arts District Studio Stroll, and if the gods smile on us, we may even get to see some organic armor at a few local festivals later this year, too.