We’ve been making what we call filigree circlets for ten years and they have always been popular. Fairy folk, belly dancers, mermaids and Burners all love them. They are smaller than most of our other head pieces but take a surprisingly long time to make. Simple elegance is harder than it looks.

We tried various techniques to speed up the process so we could sell them cheaper but never really found the sweet spot in the production/price continuum. So they went on hold for a few years. But now they are back! Thanks in part to the merfolk who frequently request custom versions, we worked on the production process again over the holidays. I think we found a better way at last. 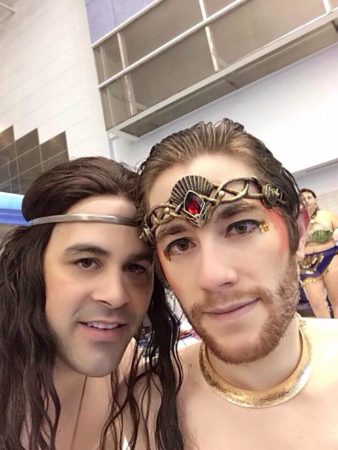 The first batch almost sold out at Mermania in January. The second batch is now listed in our shop and has sold about half so far. I’m listing five new ones tomorrow.

Woody Guthrie, Amercan folk singer and depression-era radical, had a sticker on his guitar that said “This machine kills fascists”. Like Woody’s songs, not only are these circlets beautiful, they have a secret super power! This filigree fights fascists too, by helping defend civil rights.

Until now we have kept overt politics out of our business. But with recent events we felt we should do more. We have decided to act by supporting the ACLU, which has been defending civil rights for almost one hundred years.

We listen to a lot of news, podcasts and talk radio in the studio and it’s been downright scary lately.  “I can’t stay silent.” says Paul. “I don’t want my grand kids wondering why we didn’t do more to stop it, the way we wonder about people in 1930’s Germany.”

So we write letters to Congress and show up at protests. Being full time artists, we don’t have much money to give to causes, but by donating a portion of our profits this way, we can support the important work that the ACLU does.  In a small way our work will help provide legal armor to those who need it most.

For the next 6 months 25% of the profits on all of our filigree circlets will be donated. Wear one to a ball, a convention, or a protest!