Feasting with Game of Thrones

Feasting with Game of Thrones 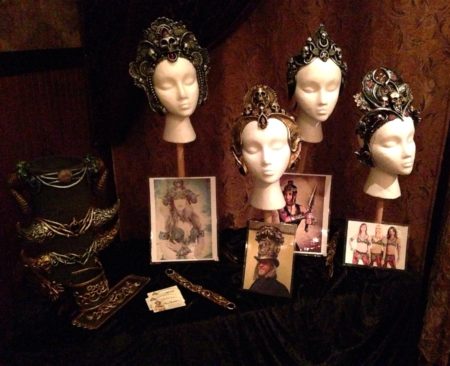 Some friends of ours have a wonderful supper club and moonshine bar in Asheville called Lex18. They serve artisan cocktails and delicious food. They’ve been hosting themed dinners for the last few years and their newest production is the Feast of Thrones.

We attended their press kickoff last week, what a treat! The room was layed out like a medieval banquet. We sampled dishes based on feasts described in Martin’s books: black sausages, salmon fragranced with lemon, honey and herbs, red and black quinoa, and a medieval fruit tart. Yum! Paul tried two of the themed cocktails, the “Night Watch” and “Westeros Redeemed” while minstrels sang madrigals. We had a table of our work displayed, the four Persephone headdresses and some elegant horns in keeping with the GOT aesthetic.

At the dinners, to be held Sundays starting April 24th, fans of all the Westeros houses will break bread together in harmony and take in a screening of each week’s new episode. Guests are asked to attend in costume and encouraged to play along.

Owner Georgia Malki says “People want context and content, and then they want to act out. They want to either be passive and watch, or be an extrovert and be Jon Snow, or one of the Starks, or whomever. We just give them enough texture points and context to have fun.”

The local station did a story about it, featuring perfomers wearing Organic Armor.