Inspiration lights you up, makes you want to get your hands dirty and make things, now! You can’t sleep, thinking about the cool materials and ideas you want to combine. It feels like a stretch, but it’s approachable. The door is open.

Intimidation looses the inner kraken on your creativity. You are awash with doubt and negative messages. The door seems frozen shut.

Sometimes there is a fine line between the two.

Both inspiration and intimidation visit me regularly. Sometimes in the space of five minutes, like when I read about the World of Wearable Art. If you don’t know about them, stop everything and go look at their site now.  It is a renowned international design competition that attracts entries from costume designers all over the world. Designs are brought to life in a spectacular stage show held in New Zealand every September. Definitely on the bucket list!

The designs that make it into the competition are so extreme and magnificent it blows my mind. And thus, I am simultaneously thrilled with inspiration, and running a non-stop monologue of harsh self criticism. “We could never make work good enough to compete with that…” 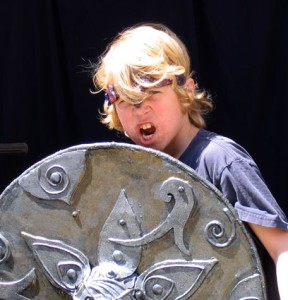 Malcolm, age 7, and the shield he made

It’s a career hazard for artists. We have to be critical of our work in order to make it as good as we can and evolve our skills. But we often get carried away and forget to appreciate what’s good in it, and how far we’ve come. And sometimes it stops us from even trying.

Some people might look at images of Organic Armor and instead of seeing inspiring beauty, they hear self-talk like “I could never do anything like that.” “I don’t have any artistic talent.” “That’s way too hard for me.”

A new friend shared with me that when she looked at the Organic Armor pictures and thought about learning the techniques, she told herself “Mine would end up looking like puff paint on cardboard, compared to that.”

I laughed but it surprised me. I know it would not look like that if she tried it. The learning curve starts very gently with the Organic Armor Arts. I’ve seen a classroom of 7 year olds learn the techniques in a few days and make things they loved. But she hasn’t seen that. She just sees the work of a master craftsman.

If you take the course and make some armbands, will they look like Organic Armor? Kinda. I’m pretty sure you are going to like them, maybe love them. But Paul has been doing this for almost eighteen years, full time for nine. His early stuff did not have the refinement and elegance that his work has now. But he loved how it looked, and a lot of other people did too, enough to encourage him to start a new career as a costume designer. 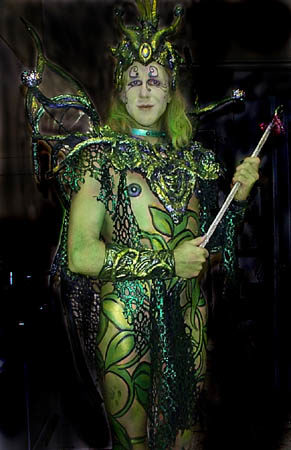 Paul in his Green Fairy costume, around 2000

The students in the course are making beautiful things that they love right now. They approach the course with a wide range of art experience, from dabblers to professionals, in many different fields. But everyone starts by brushing latex on a strip of denim, trying to translate what’s in their head into a wearable piece of art. The skills are fairly simple but offer a world of exploration.

Don’t let the “puff paint on cardboard” message drown out “Holy shit, that’s cool, I want to do that too!”