Organic Armor loves to make amazing things that support other artists, performers and creative folks in their own creative endeavors. We’ve been doing it for years but I wanted to highlight three projects from the last month so fans can see what the process looks like.

Mike Albers is a photographer from St. Louis. He specializes in fine art portraiture and loves to use props and costumes.

There is a renaissance painting in the St. Louis Art Museum, by the painter Giorgio Vasari, depicting the biblical story of Judith and Holfernes. Mike was inspired by this classic work and asked us to create the harness and belt that Judith wears, so he could recreate the painting as a photograph. 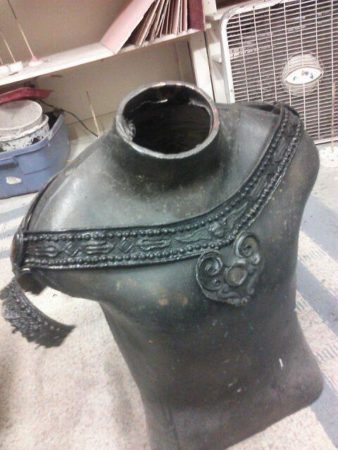 Work in progress shot of the harness for the Vasari recreation

Much in the same way that digitally created costuming in games challenge an IRL costume designer, we discovered that a painted costume by a master such as Vasari also doesn’t behave like a real costume. It looks three-dimensional and realistic, natural. But there are some freaky things about Judith’s body that don’t apply to actual bodies. Paul went through much trial and error making the pieces look as close as possible but still be wearable.

Trial and error make predicting how long something will take a rough science at best. These pieces took two weeks longer than we thought they would. But because Paul is an amazing engineer as well as an artist, and because we stayed in contact with Mike throughout, the pieces came out great.

We can’t wait to see what he does with them!

Read parts 1 and 2 of this series here and here.