The mission of Organic Armor is to make amazing things that support other artists, performers and creative folks in their own creative endeavors.

Making costume pieces for indie films or belly dance sets for tribal dance troupes are some of our favorite kinds of creative collaboration.

In the last month we’ve made several pieces that play a supporting role like that. I’m going to share a few of them over the next few posts.

We recently made a corset and greaves set (lower leg armor) for Wats-on Productions, creator of the comic Reclamation. It’s a scifi/thriller with Hollywood aspirations, the basic concept being “A struggling agnostic discovers his connection to an ancient clan of demon hunters.” So there is time travel, spiritual seeking and lots of battle scenes. What’s not to love? 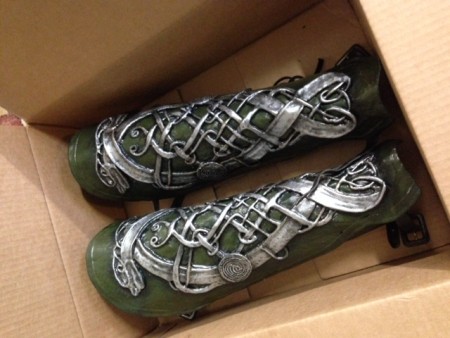 Romeal sells his books at cons around the US. He wanted to level up his visual presence at events with a model cosplaying his character Layna, a badass warrior from another world.  He sent us images of her – drawings from the comic and photos of his 3D model. Paul took those ideas and made them full size and wearable.

There is always a back and forth as the pieces are built, so Romeal was able to give feedback. This helps eliminate any surprises at the end and allows for new ideas to be worked in as we go.

We are all pleased with how the corset and greaves came out. We look forward to seeing photos of them being modeled at cons later this year.

Read on for Part 2 of this series.