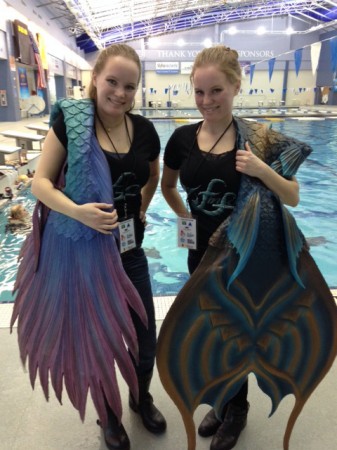 We had a good time at the NC Merfest last weekend. It was the first mermaid/merman con in North Carolina, but not the last I suspect.

Hosted by the Merking Christomer in his home city of Cary, it took place at a large aquatic center. Our booth was only ten feet from the edge of the biggest pool, often filled with splashing finned beauties.

It was a small fest, numbers-wise, but a growing genre. Mostly an east coast crowd, people travelled there from the Florida Keys to Quebec. The comaraderie and excitment was palpable.

We were located next to a couple of midwest mermaid tail makers, Bryn and Abby from Finfolk Productions. They are friendly young women with a beautiful product and a growing business. They can barely keep up with orders for their silicone tails.

There are apparently a lot of politics around the tail makers in the mer community. We got an earful and were careful not to take sides. Might be a good subject for a reality show ;-).

nd as well as artistry.  The mer folks make a big financial investment (500.00 to 2500.00 and up) to get a custom tail, so the stakes are high. It’s similar to ours in that way, but ours doesn’t have to propel someone through the water!

The number one question we got at our booth was “Can I swim in it?”. Sadly, we did not have a definitive answer. But we are going to soon!

This is what we know about Organic Armor and water: We’ve personally worn pieces in the pouring rain for hours out on the playa and elsewhere. There were no problems resulting. So we have always told people they are water resistant.

The first time I ever saw someone swim in one was this weekend. Merman Christian (see photo) bought our prettiest new circlet, put on his tail and dived into the pool. He was in and out of the water for two days and all seemed well with the circlet. But before we officially tell people yes or no on this question, we are going to do some tests.

We’ll leave the items in the jars for two weeks, checking them daily for signs of disrepair. Then we’ll give you a report.

This required a surprising amount of math. Thank goodness for Google’s unit converter.  Did you know that the sea has about 1/4 oz of salt per gallon of water?

Overall the items stood up well to the water test. The paint got a light “frost” over it, but this disappeared when it dried. The joints did not crack, the layers did not separate. So I would say with limited exposure the pieces will hold up in water.

However, our test did not take into account exposure to the hot sun in combination with water, or very frequent wetting and drying. It’s likely that a mermaid will be in and out of the water, with hot sun in between.

It also didn’t test the effects of water in combination with the constant movement of swimming . Bras will be especially vulnerable to that.

So I am officially giving Organic Armor a QUALIFIED YES on how it stands up to water exposure. To know fully we would need more extensive tests.

If you would like to order something for swimming in, make sure to tell us because we will put on extra sealant and attention to edges and joints. 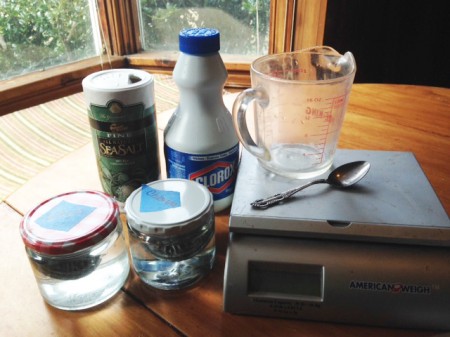