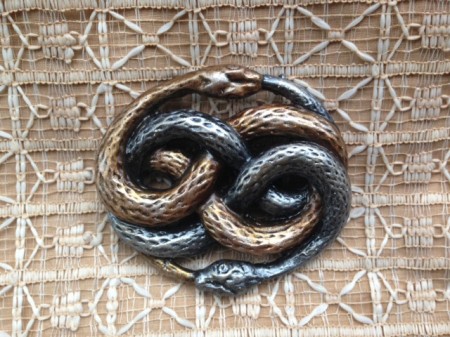 “Nothing is lost. . .Everything is transformed.”
― Michael Ende

We were commissioned to make a medallion based on the one in the book and film “The Neverending Story”. The main character Bastion is guided by the mystical talisman of the AURYN (always capitalized according the book) in his travels through Fantasia.

The ouroborus is an ancient symbol of the cycles of life – a snake with it’s tail in it’s mouth. The AURYN  is a double ouroborus with a pair of infinity signs overlapping in the center, so it is potent.

Paul sculpted the snakes from clay. This is one of his favorite tasks. Then he made a mold of it and cast the piece. After adding multiple layers of material, both in and out of the mold, it was ready to paint. Figuring out which head went with which body and what color they were supposed to be was tricky!

The novel by Michael Ende was first published in english in 1979. The film came out in 1984. But 30 years later there are still a lot of people who love this story. 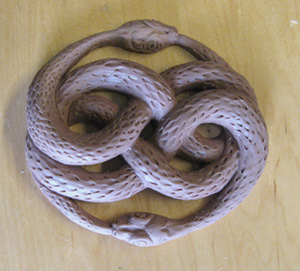 I learned this firsthand when I posted a picture of the one we made on Facebook a few days ago. People often enjoy our pictures of work in process so I thought it would get some likes.

Whew! It’s up to 5537 , the most we have ever gotten on any picture. We decided to list it in our shop and make them to order. If you purchase one soon there is still time to get it made and shipped for Christmas (if you live in the US).