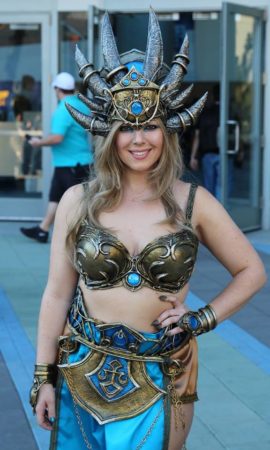 Here is Sara in her complete Queen Soridormi costume at Blizzcon last weekend.  She was first inspired to make this cosplay by digital artist Vaanel, who interpreted the WOW character in his own creative way in the image below. I should have credited Vaanel when I first posted the headdress we made last week and I’ve apologized to him for that.

To compare, see the official WOW concept below that.

Vaanel’s is more complex and beautiful yet retains the feeling of the original. Paul adapted Vaanel’s version pretty closely but of course ours had to be 3D and wearable. Decisions had to be made throughout the design/engineering process that distanced the physical pieces from the digital art. But he worked hard to hold onto the overall feeling of it.

Cosplayers have differing attachments to accuracy. Some want to look exactly like the original character, some want to steampunk it, genderbend it, or alter it with some other personal twist.  We are partial to the latter variety.

Who owns the original image? I guess legally it’s Blizzard. I’m more interested in the question – what is an original anyway?

A case can be made for the idea that nothing is original. I am fascinated by how characters from popular culture grab hold of imaginations and spawn. It’s wonderful when people are so inspired that they take it out of the game, movie or book and into other realities: fan fiction, Youtube videos, visual art, figurines, music, cosplay, etc. The older references are still there while new ideas from all over the place are mashed in.

This is a time honored tradition in art.  Picasso referenced African art. The impressionists were inspired by Japanese woodblock prints. Wharhol had his Campbell soup cans. All creative work builds on what came before.

It’s been going on since people first told stories around a campfire.  The characters we love in games, movies, etc. are often based on far older ideas found in mythology, fairy tales, literature, artifacts. Queen Soridormi has joined the awesome parade of archetypes through time.

At the same time however, I think artists should be credited whenever possible. There is “inspired by” and there is plain “ripped off”. I’ll leave the exact distinction to others, but when people claim to have created someone else’s work that is bad karma.

I think as long as you are hand-making the derivations and you credit the people directly behind you as much as you can, you’re cool.

I am grateful to Vaanel, Sara, and the artist who made the original WOW character for their visions, and for the chance we had to run with it in our own way.

Those WOW fans know how to build amazing costumes. Check out this video of Blizzcon 2013 costumes to see some (Sara is at 0:22).