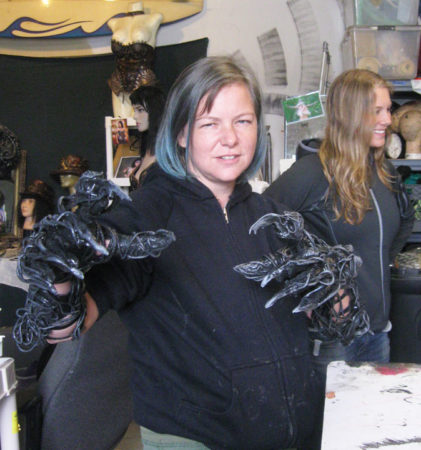 We are creature designers for a movie!

A few weeks ago we created two special effects creature costumes for The Healer. This is a supernatural thriller currently being shot in the DuPont State Forest just south of Asheville. Written and directed by Giorgio Serafini, it features the rising young stars Joel Courtney and Isabelle Fuhrman. Joel played Joe in the summer hit Super 8, produced by Steven Spielberg. Isabelle Fuhrman has spent a lot of time in WNC this summer, having already played Clove in The Hunger Games.

Production designer Gabor Norman and his team needed a few items for the set just before the first day of shooting. They googled “army surplus Asheville” and found Organic “Arm”or. They loved the images that came up. Gabor had been looking for something to enhance a fight scene between two mysterious forest demons and the guardian characters. He thought we might be able to create it.

He drove up from the production basecamp to see the studio. It was a flurry of activity. Paul and Lynette have been very busy with Halloween orders as well as making inventory for the upcoming Belly Dance Festival TribOriginal.

Paul had always dreamed of creating costumes for fantasy and horror films, but getting a foot in that door is tough. When we moved to Asheville from LA four years ago  he said “If Hollywood is ever going to find me, they will have to come to North Carolina to do it.”

Well, Hollywood is coming to North Carolina more and more these days, thanks to new incentive program in the form of a refundable tax credit. Spending by production companies is expected to top $200 million in 2011, the highest ever.

Gabor was thrilled with what he saw and asked if we would help him create his monster vision. The only stipulations – not much was left in the budget AND shooting started in one week! We decided the opportunity was worth it, and spent the next six days and nights working madly on the pieces. It’s amazing what motivation and enough coffee can do! 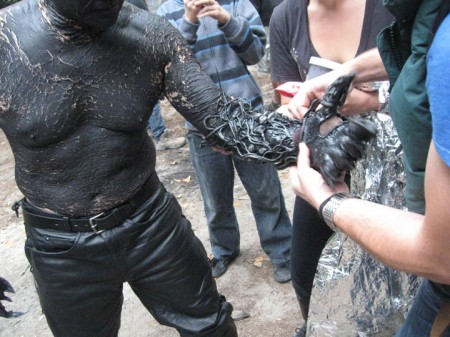 Despite it’s big name actors, The Healer has a small art department with a budget to match but Gabor and his team are thrilled with the creative opportunity it has provided them. The story is visually rich and layered. It has some of the mystery of  The 6th Sense and the dark beauty and horror of  Pan’s Labyrinth.

The forest monsters are man-like shadow creatures who look as if they have emerged from the roots of a tree. Their hands are razor sharp clawed branches. We designed and constructed gloves, sleeves and a chestplate. We also built four “Gandalf sticks” as they were unofficially named. Padded with foam to make the fight scene safer, they look like something between an oak walking stick and a mage’s staff.  Paul took a walk around the train yard behind the studio to find actual branches to use a core.

We all got to visit the set last weekend, even Connor.  We watched the crew and actors shooting a night scene in the dark forest by a rushing waterfall. Seeing the creature actors wear the pieces, along with full body makeup, leather garments and fish eye contact lenses was thrilling.

The next day we went back to filling orders for Valkyrie style bras and steampunk top hats, but the excitement of The Healer has not worn off. We will get a creature design credit in the film, due out in 2012. You will definitely hear about it here when it’s released.

If it does well at the box office, perhaps more creatures will be emerging from Asheville onto the big screen in the future. 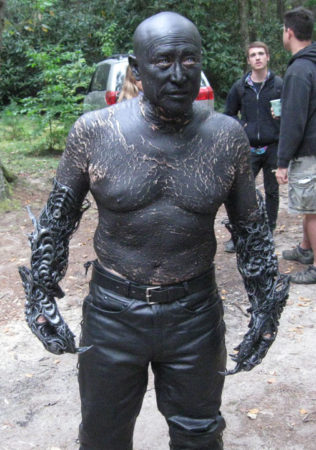 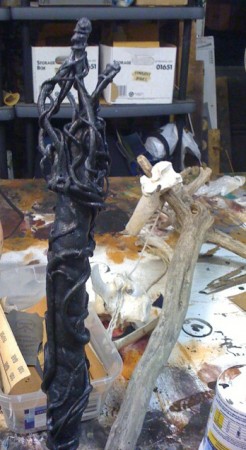