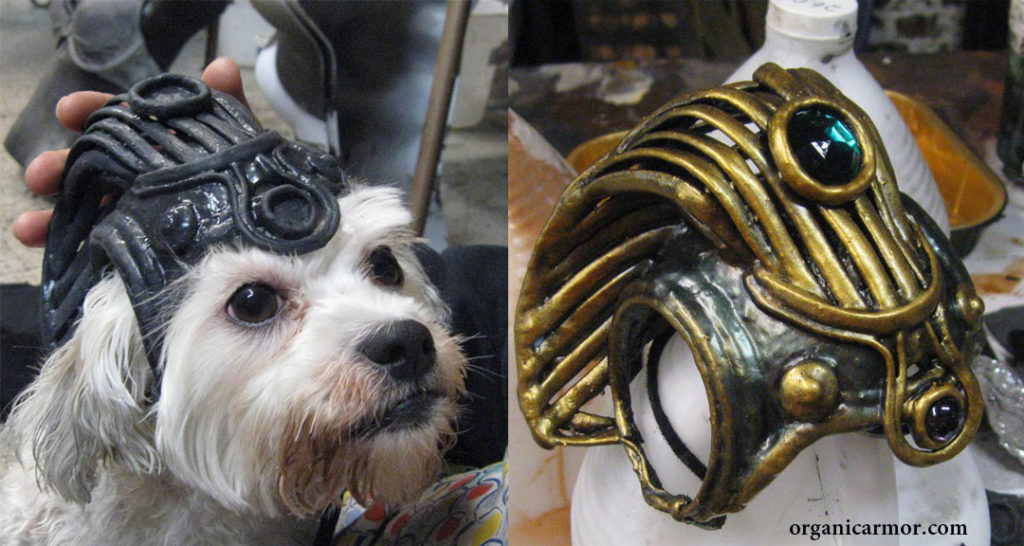 We’ve been making dog armor since 2007, though only a few sets a year. It takes a certain kind of dog lover and dog to invest in such a unique project.

Making costumes for dogs started as a whim. A local gallery in Eagle Rock, CA  put on an annual group show called Dog is Love. We had been talking about pugs a lot in the family because our son was playing a role in a play – Skip the Flying Pug. He was fascinated by all things pug-gy. Paul decided it would be fun to make armor for a pug and we connected with a pug rescue organization to find some models. 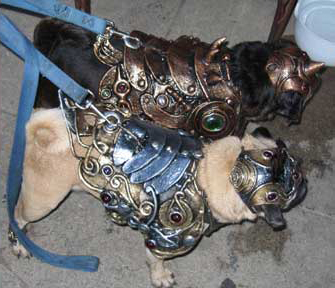 The art opening was a blast. When Paul arrived with the two pugs in battle gear, the crowd rushed to the sidewalk to see! It was like Lady Gaga had showed up.  Pictures from this made their way to the internet and got picked up by mega-site Gizmodo. We suddenly got thousands of hits on our site and many inquiries.

The next year we made armor for a pug named Diesel, another for a Texan pup, and one for Canadian Merry.

In 2009 we made the biggest set to date, for a 75 pound husky named Luc. Rhoda, his owner was so pleased she wrote a wonderful testimonial for us.

Which brings us to the latest edition, Anubis.  Ken from San Francisco contacted us about making armor for his chihuahua mix Whistle. He sent us this picture for inspiration. 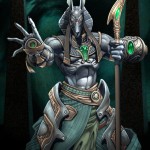 We did some drawings, came to an agreement and then got really busy with shows all summer. Luckily, Ken was patient. Paul started on the armor in September and it came out great.

It’s challenging making a costume for a dog, especially one that lives thousands of miles away. You can’t try things on as you go to make sure they fit and move right.

We get a lot of measurements and check them twice to be sure, then Paul builds a dog form from wire, foam and misc. useful junk laying around the studio.

We call on our local friends with dogs of the approximate size to test drive the pieces. Then we ship it off and hope for the best. Occasionally there are issues but we’ve always been able to resolve them.

Whistle and his armored colleagues across the world will soon be suiting up to win lots of Halloween costume contests and make people smile! 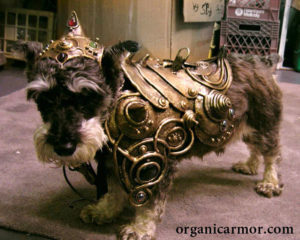 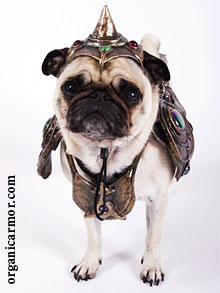 Merry shows off her Xena side 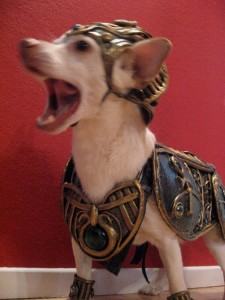